With the resurgence of pop culture superheroes in the last several years, the launch of the MyT1DHero mobile app is a timely one. MyT1DHero couples the attraction of superheroes with the struggle against the very real foe of type 1 diabetes (T1D), a chronic pancreatic disease that disrupts or stops the production of insulin, which is needed to regulate blood sugar. 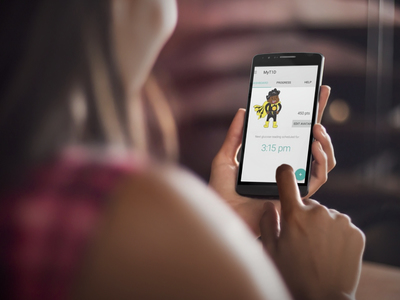 Bree Holtz, an assistant professor for the Department of Advertising + Public Relations whose research focuses on information communication technologies and healthcare, is the principal investigator behind the MyT1DHero app. Other MSU researchers contributing to the project include MSU faculty Shelia Cotten, Denise Hershey, Mandy Holmstrom, and Katharine Murray.

MyT1DHero is jointly designed for adolescents ages 10-15 with T1D and their parents. The goal of the app is to aid adolescents in transitioning to independently managing their health, encouraging self-sufficiency while maintaining an open line of communication with parents. The hope is that encouraging more positive communication between children and parents will help improve children’s health and reduce stress for their parents.

“We’re generally in the doctor’s office for about 15-20 minutes, so a lot of our care takes place outside of the doctor’s office. Chronic disease has to be managed continually, and you need that support, especially in adolescence,” said Holtz. “I’m interested in looking at that dynamic between the informal caregiver and the child who’s managing the disease. Other research has shown that if this transition period includes more positive parenting, more positive communication, and better trust, that this will carry on throughout the years.”

Here’s how it works: MyT1DHero connects a child’s app to their parents’ app. During registration, a parent and their child enter the child’s blood glucose testing schedule, which the app then uses to remind the child to test. Once the child enters the blood glucose results into the app, MyT1DHero automatically sends the information to their parent’s app. To maintain motivation to use the app, the child earns points for testing their blood glucose at their scheduled times. Accessories can be purchased with the accumulated points for the child’s MyT1DHero avatar. In addition to blood glucose monitoring, the app provides suggestions for positive messages for the parent and child to send to each other. The purpose of the app is to transition more responsibility onto the child while allowing parents to see how their child is managing the disease and to provide tools for more positive communication.

The app has undergone multiple rounds of testing. Now in their third year of the three year study, the team behind MyT1DHero is once again seeking study participants. The team hopes to enroll a total of 70 families before March of 2019. In an effort to achieve a baseline understanding of the app’s effectiveness, enrolled families will participate in a randomized, 3-month control trial. With the gathered data, the MyT1DHero team hopes to continue to evolve the app.

“With our beta test, just looking at the preliminary data, we found that quality of life improved significantly for our participants and we were seeing a downward trend in HbA1c,” Holtz said.

Measuring HbA1c allows researchers to track a patient’s average blood sugar level over the span of two to three months. The MyT1DHero team’s initial findings are promising, as it is difficult to see significant improvements in HbA1c. In addition to these improved results, progress in parent-child communication is being made.

“Overall, participants felt that communication surrounding diabetes between themselves was good,” said Holtz. “We’re also finding out that the kids want to be able to participate in teams within the app. Right now they’re just talking to the parents, but they want to talk with other kids. So we’re trying to figure out a way to do that responsibly.”

The research for MyT1DHero is currently supported by a grant from the American Diabetes Association, and a series of informational videos made in conjunction with WKAR and Sparrow Health System is planned to air on PBS to help educate more people about type 1 diabetes.

“We found that parents feel a lot of stigma and guilt and shame because a lot people don’t recognize the difference between type 1 and type 2 diabetes, and they felt like they should have recognized their child’s diabetes earlier,” said Holtz. “So we’ve worked with PBS to see if they could possibly put together some videos on their family channel that will go out to explain the symptoms of type 1 diabetes and the differences between type 1 and type 2 to help increase awareness and to help parents know that they didn’t cause this. Parents shouldn’t feel guilty about it. Their kids have it, it’s scary, but there’s nothing they could have done to prevent it.”

MyT1DHero is not yet available to the public and is only usable on Android phones, but the team is currently working on expanding the app’s accessibility to iPhones. As testing moves forward, the team is excited to continue learning how MyT1DHero is impacting parent-child communication and the quality of health for participants.