The FDA Approval and Clinical Testing of the Artificial Pancreas

By Dr. Michael Wood, Associate Clinical Professor of Pediatrics, and Clinical Director of the Pediatric Diabetes Program, University of Michigan

Hello everyone! I bring you great news from the world of diabetes care. In late September, the FDA gave approval to a new device from Medtronic called the 670G.

This device consists of a “smart” insulin pump and a continuous glucose monitor (CGM), which sends electronic signals to the pump about the current glucose level in the body. The pump then takes this information, and decides how much insulin to give on a minute-to-minute basis. This device, which should be commercially available within a year, is the first of many devices that will hopefully come to the market in the next several years in the “artificial pancreas” pathway. 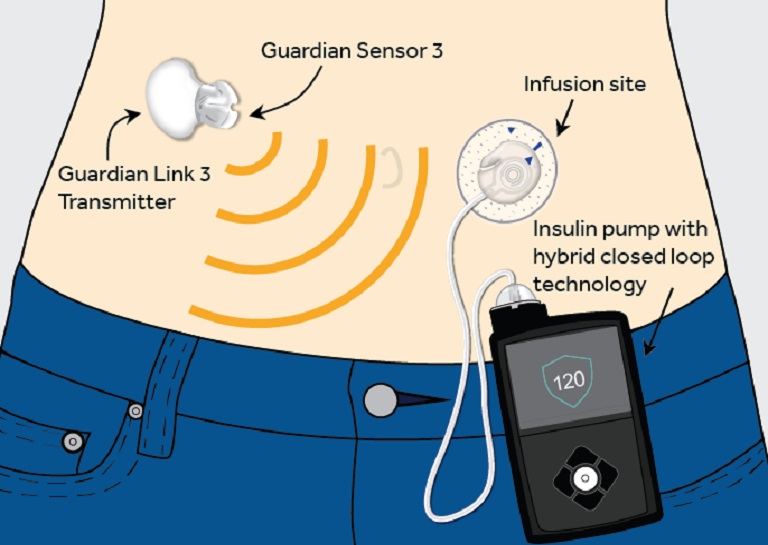 The research on this system was reported by Dr. Richard Bergenstal, of the International Diabetes Center in Minneapolis, at the American Diabetes Association meeting this June. The study, found here, included 124 people (14 years of age and above) with Type-1 diabetes. Participants using the device for three months unsupervised at home demonstrated that this system is both safe and effective in controlling blood sugars. The results were superb. The system was activated to control the glucose 87.2 percent of the time, and benefits were seen over the three months in regards to percent of time spent in target range, percent of time spent with hypoglycemia, and glucose variability. In addition, the average hemoglobin A1c decreased from 7.4 to 6.9 percent. There were no episodes of diabetic ketoacidosis, severe hypoglycemia, or serious device-related adverse events. 80 percent of the subjects decided to use the device for an extended period of time after the study was completed.

At the University of Michigan, we are testing this device in a research study in children ages 7-13. After the study is complete, I will give everyone an update.

If you are interested in learning more or participating in the clinical trial, please review the information found here.

Although this tool is a tremendous step forward, some issues remain. With this device, users need to enter their carbohydrates into the pump when they eat, and also need to poke their fingers to calibrate the sensor. I suspect, as more rapid insulins become available, and sensors become more accurate (eventually not requiring finger pokes), that the eventual dream of an artificial pancreas will be realized over the next several years, and the burden of diabetes care for people with Type-1 diabetes will be lessened dramatically.