To Phone or Not Phone Your Child? That is the Question

My son was 22 months when he was diagnosed with type 1 diabetes. We have been through everything, from dealing with insulin pumps while wearing diapers to Valentine’s Day school parties and sleepovers. Now he is eleven years old and in middle school. He and I handle his diabetes every day.

When he was five, he was invited to a birthday party. When I dropped him off, the mom said her husband was just leaving to go get the pizza. I decided to stay until the pizza arrived so I could dose him for the correct amount of carbohydrates. Needless to say, an hour and a half later, I felt incredibly awkward still being there and the pizza still hadn’t arrived. I found myself staying in the basement of the boy’s house with 20 little boys running around me having a nerf war. I was super annoyed and told myself, “Something has to give.” As I drove home, I realized I hadn’t stayed because the pizza hadn’t arrived, but I stayed because I was afraid to leave him alone at a parent’s house that didn’t know much about diabetes. He was at an age where it was awkward to helicopter around him, yet I didn’t trust his ability to make life and death decisions on his own. Choosing not to allow him to go to the party because of diabetes wasn’t an option to me. The next day, I went to the store and got my little man a flip phone. I was super uneasy about the judgement I would receive from other kindergarten parents. I knew it seemed ridiculous to give him a phone at such a young age. However, I decided when he was away from me, I needed to know that he was ok. Of course, he was thrilled with his new little piece of independence. We discussed rules and because it was only a flip phone, he couldn’t play games on it. 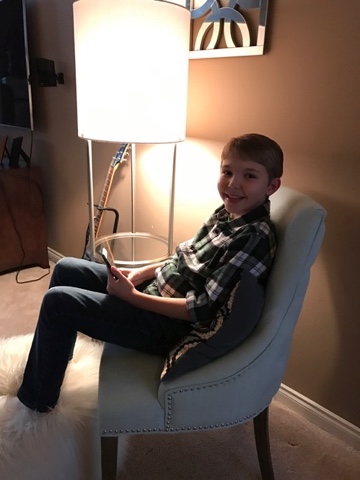 For the next six years, there were many times that I realized getting him that phone (and a couple of upgrades since then) was probably the best diabetes mom (or D Mom as so many of us love calling each other) decision I have ever made. I have been able to set rules about phones early when he still listened and followed them. He’s been able to learn responsibility for an expensive item (he never did find out that first flip phone was actually free when I added another line to our plan for $10.) To him, that phone was important and irreplaceable. It allowed him freedom. Having type 1 diabetes when you are growing up can be stifling enough. When you are nine and ten years old, you really don’t want your mom following you around the neighborhood, to a party or to a sleep over. He was able to do all of these things knowing that if he was in trouble, I was only a call or text away. More importantly, it allowed him to learn to trust himself.

I also imagined caring for your diabetes at a young age would be kind of like taking that first leap into the lake and knowing you would be able to keep yourself above the water. With each new opportunity of independence, he has handled himself responsibly. He understands that the phone is his way to care for himself.

Finally, it allowed me freedom. When you are a D Mom, you are as protective as a mother bear in the wild. Every minute of the day and night, low blood sugars are ready and waiting to snatch your baby from your watch. We are vigilant and fearless and it is hard to let our cubs out of our sight. Knowing he had that phone, allowed me to go back to work. It allowed me to let him go to the sleepovers and allowed me to sleep while he was there. He still doesn’t know I am usually within ten minutes of him. It allows me to watch him learn to care for himself and teach him pitfalls and dangers along the way.

Getting him a phone was a great decision for our family. Every family is different and every child has their own needs. For our family, the phone gave us many opportunities for him (and me) to have a little independence while still feeling connected. And I don’t regret it.